skip to main | skip to sidebar

Just on 3 years ago, I accompanied my eldest daughter - then 4 years old - to accomplish one of my life dreams: to watch Arsenal play at Highbury.

The previous season (2003/2004) was the last time Arsenal won the English Premiership - although I have high hopes for this season. Not only did they win the Premiership in 2004, but they went through the whole season undefeated. The game we saw was against Charlton, with Arsenal winning 4-0 - including one magic goal scored by Thierry Henry, now sadly playing in Spain.

Arsenal had commenced the 2004/2005 season well, and were undefeated until 2 weeks after we had seen them play. The following week, Arsenal defeated Aston Villa, but then they were defeated by Manchester United, and their longest undefeated run came to an end.

Unlike football games in Australia, the atmosphere in England was simply breath-taking. The closest I have experienced in Australia was when Australia played Uruguay in Sydney in 2006 to advance to the World Cup Finals for the first time in 32 years.

Not only was the atmosphere electric at the game, but also in the streets surrounding the Stadium. The vast majority of spectators arrived on foot or by public transport (whereas in Australia, many people drive to games) - and streets were closed off to allow people to mill around and experience the occasion.

Scalpers were working quietly, asking more than AUD$350 per ticket.

In Australia, football grounds are rarely right in the middle of a residential area - but in North London, the terrace houses are just across the road. Some owners established stalls in their front gardens, selling lollies (sweeties for my UK readers), scarves, banners, T-shirts and all things Arsenal.

We arrived at the ground with plenty of time to spare, and we were surprised to see how few people were in the ground for what was a sell-out. Even up to 10 minutes before kick-off, the stands were only sparsely occupied - but within that last few minutes, supporters came from the Pubs and the streets and by kick-off the ground was full. 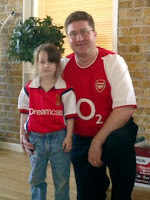 We proudly wore our Arsenal kit - but we hadn't accounted for the Gunners' supporters habit of standing for much of the match. In Australia, if people stand during the general play, you are likely to receive abuse until you sit down, but in London, it seemed that every time the ball advanced over the half-way mark towards us, there was this wave of people standing up - unlike a "Mexican wave" that goes around the ground, this wave started at the front and rushed back as the people behind the people in front joined in so they could see.
One problem: my girl was only 4 years old - and before long she started becoming upset because she couldn't see. My solution? For the rest of the game, I simply held her on my knee, and as the "wave" started, I stood up holding her - which she just loved.
Now that Arsenal has moved their Headquarters down the road to the Emeritaes Stadium, never again will we see this great and proud Club play at Highbury.
A life ambition achieved in the nick of time!
Posted by Da Xiang at 12:19 PM 1 comment:

Persia (Iran) - Home to some of the world's most hospitable people 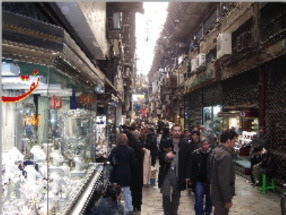 Yesterday's TV News channels in Australia were full of reports of the address given overnight by Iran's President at a USA University. He was "welcomed" to the microphone by an address that criticised his regime - and him personally. He responded by saying that the remarks were ill-informed and that no visitor to Iran would have been treated so badly.

As I watched and listened, a few thoughts occurred to me. I wondered (1) whether the USA President would have even been invited to speak at an Iranian University; and (2) if he was to be so invited, whether his safety could be assured, quite apart from his being received/welcomed warmly.
I then turned my thoughts to the extremely warm hospitality I received in Iran just a couple of years ago. Sure, I went to Iran not entirely sure of how Westerners would be received - and it must be said that my companions and I saw very few Westerners (just a couple from Europe and another couple from North America). However, I found the Persian people to be extremely warm and enthusiastic in their hospitality - just as "The Lonely Planet" had said I would!

Just as we urge visitors to Australia to distinguish (positively or negatively) between our Government and our people, so it is important for us to make that distinction where Iran is concerned.

In Ahvaz - a City in the South West of the country, still showing the damage from the Iran/Iraq War of decades ago, and very obviously still a Military City - we were asked what we thought of the Iranian Government (in broken English that was far better than my Farsi!). Our reply: "We are only visitors to your country. We love your country and your people" - all of which was true and was readily accepted.

In Tehran, where this picture was taken (in the famous "Grand Bazaar" which has some 10Km of covered streets), we found that most people were simply anxious to get on with their life.

By the way, if you think the traffic in China is chaotic - steer clear of Tehran. It is much worse!
Posted by Da Xiang at 4:37 PM 1 comment: 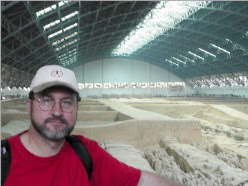 Surely one of the wonders of the human world is the Museum of the Terra Cotta Warriors, near Xi'an, China. The First Emperor, all-powerful (it seemed) in life, was more than just a little anxious about what would happen to him in death. So he commissioned an entire Army of warriors to accompany him in the underworld.
Excavations have revealed that the Army - with Infantry, Cavalry, etc. - has been stationed in the place where a living Army would have been. There is a hillside a Kilometre or so from the main location, and it is thought that this houses the bodily remains of the Emperor - even said to be floating in an eternal river.
I visited the Terra Cotta Warriors in September 2006, and was amazed by the scale, and by what that told me about the lengths people will go to in order to deal with their insecurities and fears concerning death. For myself, I am glad that Jesus Christ offers me a fulfilling life here and now, and an assurance of eternity in His presence, so the fear of death has no hold on me!
Visitors to the Museum are told the story of how the Warriors were discovered by Mr Yang while digging a well. Mr Yang now works at the Museum, signing books about the Museum. Looking at Mr Yang, I got the impression that he would much prefer to still be digging wells, instead of being gawked at by tourists all day long. There is a sign asking people not to photograph Mr Yang, but that is ignored by many. My friends and I wondered whether there was a rotation system to determine who would be Mr Yang today, but on purchasing a set of Postcards, I saw that there was in fact a whole family of Yang - four of them - who were involved. Although we only saw one Mr Yang in person, it seems that all the Messrs Yang take their turn on duty - I'm sure they just can't wait!
Posted by Da Xiang at 10:52 AM No comments:

I travelled to China with a group of friends in 2006, and I acquired a reputation for having a good sense of direction and a good memory. When we were in Shanghai and about to leave for home, Eric asked his son - a resident of China, fluent in Mandarin, what would be a good name for me - and he suggested "Da Xiang" (Large Elephant) - he said because elephants never forget! Or was he really making reference to my size? In either case, I adopted Da Xiang as my Chinese name, and promptly purchased a Chinese caligraphy seal with these characters.

The name has really taken off. I visited my sister in Thailand and came home with a set of wooden carved elephants. My daughter then gave me an elephant mug for Christmas - which sits on my Office desk and is used daily.

Da Xiang
I live in Sydney with my wife and three children (aged 22, 7 and 2). I have a Welsh father and a Scottish wife - and very little English heritage! I have lived all my life in Australia, but in recent years I have been privileged to travel to the UK, Iran, Thailand and China (where I shared a Hotel room with "pickled eel"). I find that reflective action is helpful to gain perspective.